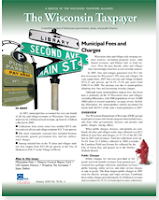 Excerpt: Waukesha aldermen are grappling with whether to hand homeowners a new $136 fee for garbage collection, recycling and large-item pickup next year, as Mayor Jeff Scrima is advocating, in order to maintain a politically appealing though not state-mandated tax levy freeze.

With some aldermen already publicly opposed to the fee, Finance Committee Chairman Joe Pieper wants his committee and other council members to give "a very good indication" of whether the fee will fly at the committee's 6:30 p.m. meeting Thursday.

Whether to charge user fees is the kind of question that municipal officials have faced before and will face again. For example:


Municipal fees have been trending upward in both the kinds of services financed with them and the amount charged, according to a 2010 Wisconsin Taxpayer Alliance report.

Garbage, sewer and parking fees were primarily responsible for the increases, the report says.
Posted by Retiring Guy at 7:56 AM