Excerpt: Can't calculate a tip or balance your checkbook?

Take heart. Maybe you can blame your brain -- specifically, the parietal cortex in the top back part of the head. It could be a problem that has roots not in a failed arithmetic or "new math" lesson, but even earlier. 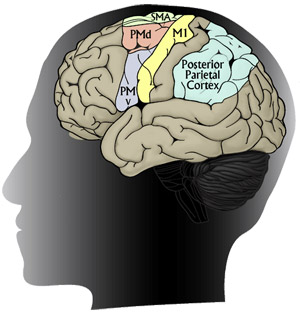 LINK to illustration
Recent findings indicate that how well 3-year-olds estimate quantities predicts their math ability in elementary school. Another study funded by the National Institutes of Health showed that the innate capacity to estimate is impaired in children who have a math learning disability.

The findings are so new that there's no widely accepted way to diagnose what's known as dyscalculia (dis-cal-KOO-lia) [there's an org for that], nor any set strategies for coping with it -- even though 5 to 8 percent of the population is thought so suffer from the math learning disability. Consider it the mathematical partner to dyslexia, which impairs reading ability.

While researchers have explored causes of dyslexia and developed strategies for compensating, the study of dyscalculia lags about 30 years behind. As a result, many people remain stymied by math. Meanwhile, math dysfunction is socially accepted.
Preschoolers' Grasp of Numbers Predicts Math Performance in School Years. Kennedy Krieger Institute  9/14/2011).
Posted by Retiring Guy at 8:43 AM