Excerpt: The idea was spawned nearly two decades ago -- a sprawling, ultramodern, multimillion-dollar main library on the city's east bayfront.

Erie County Councilman Fiore Leone was among those who scoffed at the suggestion.

Fifteen years and more than 5.5 million visitors later, Leone has no problem admitting that he was dead wrong about whether the Raymond M. Blasco, M.D., Memorial Library could thrive on Erie's waterfront. 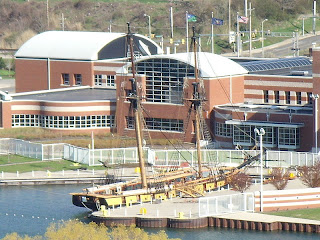 The Erie Maritime Museum, the Brig Niagara, and the Blasco Library.
"There wasn't anything else down there (on the bayfront). I felt it would be tough going for the library going down there," Leone said.

"But when you come down to it, I think that it was the best thing they could have done," Leone said. "To me, it stimulated growth and was a catalyst for everything that came down to the bayfront later."
Posted by Retiring Guy at 6:56 PM