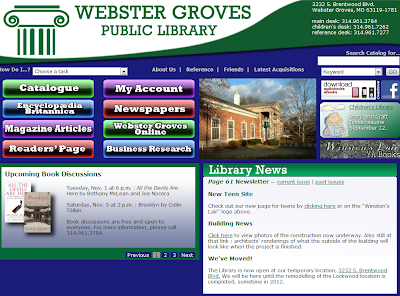 Webster library expansion at a standstill; board expects it to be rebid. (St. Louis Post-Dispatch, 10/26/2011)

Excerpt: Libraries are typically restful havens for readers and learners, but the $3.1 million expansion of the 60-year-old Webster Groves Public Library has been anything but peaceful.

The expansion has been marked by construction disputes, delays and finally a decision by the general contractor, Frederich Construction of Labadie, to walk off the job site. No work has been done at the site, 301 East Lockwood Avenue, for more than a month.

A spokesman for the Webster Library Board said in an interview that it's likely the project will be rebid so that another general contractor can complete the work.

Completion had been expected in mid-December. The stoppage and rebidding could push that back by four to six weeks. (The library is now operating at a temporary location at 3232 South Brentwood Boulevard.)

"The library addition is going to get built, just a month or two later than planned," said the spokesman.

In 2009, more than 60 percent of Webster Groves voters approved a 13.5-cent property rate increase, bringing the library's rate to 27 cents for each $100 of assessed valuation.
Posted by Retiring Guy at 8:30 AM