Turning Data into Stories without Human Authoring or Editing 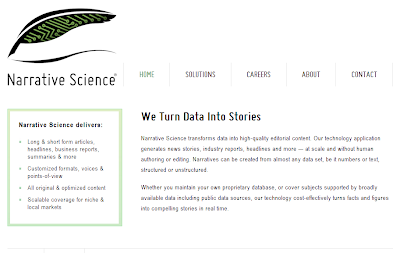 Excerpt: But Narrative Science is based on more than a decade of research, led by two of the company’s founders, Kris Hammond and Larry Birnbaum, co-directors of the Intelligent Information Laboratory at Northwestern University, which holds a stake in the company. And the articles produced by Narrative Science are different.

“I thought it was magic,” says Roger Lee, a general partner of Battery Ventures, which led a $6 million investment in the company earlier this year. “It’s as if a human wrote it.”

Experts in artificial intelligence and language are also impressed, if less enthralled. Oren Etzioni, a computer scientist at the University of Washington, says, “The quality of the narrative produced was quite good,” as if written by a human, if not an accomplished wordsmith. Narrative Science, Mr. Etzioni says, points to a larger trend in computing of “the increasing sophistication in automatic language understanding and, now, language generation.”

The innovative work at Narrative Science raises the broader issue of whether such applications of artificial intelligence will mainly assist human workers or replace them. Technology is already undermining the economics of traditional journalism. Online advertising, while on the rise, has not offset the decline in print advertising. But will “robot journalists” replace flesh-and-blood journalists in newsrooms?
Posted by Retiring Guy at 6:13 AM