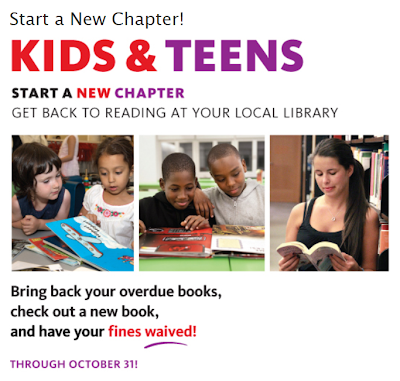 Excerpt: Patrons through the age of 17 will not be charged late penalties when returning overdue books. The program is designed to encourage children and teens to return to their libraries and check out new materials without the fear of having to pay large, longstanding fines. With the new school year underway, giving students access to their public library is more important than ever.

The goal of this program at Brooklyn Public Library, The New York Public Library and Queens Library is to welcome children and teens back to their local libraries. When patrons accrue $15 or more in fines, their library temporarily suspends their borrowing privileges until the fine is paid. Across the city, nearly 100,000 kids and teens will benefit from the New Chapter program.
Posted by Retiring Guy at 12:23 PM