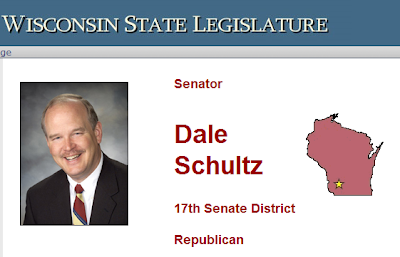 Not a lot to smile about lately
Except for the fact that he refuses to abandon his principles.

Excerpt:  Republican state Sen. Dale Schultz said this week he was "decoyed" on Feb. 17 by Gov. Scott Walker into missing a key chance on the Senate floor to put in play a compromise on Walker's plan to eliminate most union bargaining for public employees.

A Walker spokesman confirmed that a meeting occurred that morning in the GOP governor's office amid a day of drama and chaos at the Capitol.

But the Walker aide and the top two Republican leaders in the Senate strongly denied that there was any intent or plan to lure Schultz into missing a vote in the Senate.

Schultz acknowledged that he had no proof of the governor's intent and that he didn't ask the Senate to reconsider its action later that day on Walker's budget-repair bill or use another opportunity the following week to introduce his amendment.

But he told the Journal Sentinel that he felt he was having some success getting members of the Senate Republican caucus to sign on to his compromise, in which he sought larger financial concessions from public employees but a two-year sunset on the limits to collective bargaining.

"You're damned right I think that's what they were doing," Schultz said of Walker's intent. "It's appalling to think about it."


What's intriguing to think about is this.  Let's say the Senate Democrats end up with a net gain of two seats in the recall elections, which leaves the Republicans with a 17-16 edge.  Could Schultz end up giving the Democrats a working majority?  At least on some issues.

Here's a description of a "Lunch with Senator Tim Cullen and Dale Schultz" event.

Sen. Cullen [D-Janesville] and Sen. Schultz [R-Richland Center] are currently visiting each other's districts in an effort to understand the challenges facing their constituents. It is hoped that by understanding each other's districts, it can be proven that bipartisanship is not dead in Wisconsin. Sen. Cullen visited cities in the 17th District last week, and now Sen. Schultz will visit the 15th District; Janesville in the morning and Beloit in the afternoon. This luncheon provides members with the opportunity to ask questions regarding political issues facing the State of Wisconsin.
Posted by Retiring Guy at 9:03 AM