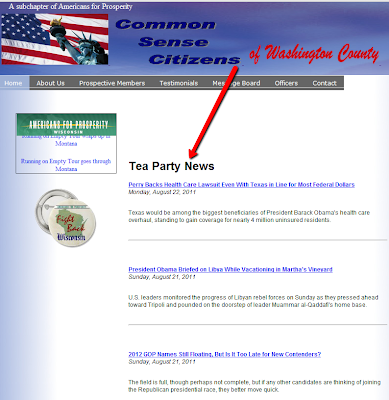 Excerpt:   Tea party agenda? Several School Board candidates ran in the past few years on a platform of holding taxes lower than would be allowed under the state's revenue limits. Three members of the current board - president Marquardt, Dave Weigand and Bart Williams - sprang from the grass-roots group Common Sense Citizens of Washington County, which is affiliated with Americans for Prosperity, an organization that helps finance tea party political activities. Other group members include West Bend's newly elected mayor, Kraig Sadownikow, as well as aldermen and county supervisors elected since Common Sense formed in 2009, said Scott Schneiberg, president of the group.

The goal of Common Sense Citizens is to educate citizens on what's going on in the community by bringing in speakers of all political views, Schneiberg said. The group encourages people to be involved on a local level and will help members with campaigns if they decide to run for public office, he said.

Critics say the new wave of elected officials has gone beyond an agenda of fiscal conservatism by pushing a social agenda they see as wrong for public education.

In denying official school status for a Gay Straight Alliance chapter, the board shrugged aside warnings from the school district's attorneys that the decision was likely to prompt a costly lawsuit. The board also ignored an administrative recommendation that the club met the district's criteria to be sanctioned.

"They've (Common Sense Citizens) organized to take over and hijack local government," said Waring Fincke, a West Bend attorney who filed a federal lawsuit on behalf of the Gay Straight Alliance. The lawsuit contends that board members violated a federal law that forbids schools from denying a group access to facilities based on the group's beliefs and that the board violated students' First Amendment rights by discriminating against them based on their speech.
Posted by Retiring Guy at 6:53 AM