Telcos Spend Big Bucks to Get Their Way in North Carolina

And now back to our featured story.

Excerpt:      Wilson didn’t go this route because its 50,000 citizens lacked access to basic broadband — some other options were available. But city leaders were convinced that the Internet access that private-sector operators offered was not fast enough or affordable enough for local businesses to have a real shot at competing in the global economy. And they suspected that they wouldn’t be first on the list when the incumbent cable providers got around to making the costly infrastructure upgrades that would soon be necessary.


GL interview 1 from City of Wilson, NC on Vimeo.

“We wanted to make sure that we had the infrastructure in place to make us competitive in the future,” says Brian Bowman, public affairs director for the City of Wilson. “The fact is that if profits are your only motivation for upgrading, then you’re going to go to the places that have the most demand. We worried that we would end up in a ‘have-nots’ area when upgrades were made.”

Three other small cities in North Carolina came to the same conclusion Wilson did, making the state a hotbed of the municipal broadband movement. This year, however, the state legislature passed a law that will make it difficult if not impossible for more cities to own and operate their own broadband networks. The law, which follows restrictions in 19 other states, represented the culmination of many years of lobbying by large cable and telecom companies, who complained that cities like Wilson enjoyed unfair advantages in the race for customers. 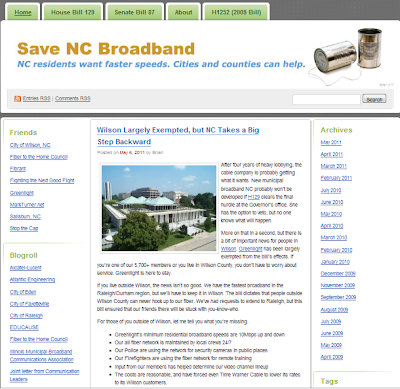