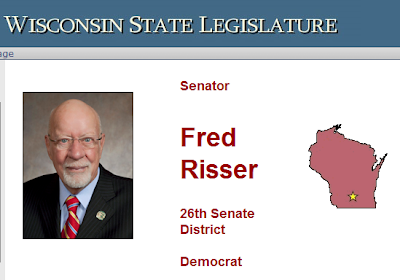 What will Wisconsin Democrats do if their recall dreams come true? (The Isthmus, 7/28/2011)  Thanks to Kris Adams Wendt, who alerted me to Jay Rath's column.  I picked up this issue of The Isthmus last Thursday but obviously  skimmed through its content too quickly.)

Excerpt:   So what is possible for Democrats if their dreams come true?

"We can put a dam to the erosion of the Wisconsin view on things," says Risser.

The earliest petitions can be filed for the recall of Walker is Jan. 3, 2012. With a new governor in place, and the Senate in Democratic hands, collective bargaining, shared revenue, school funding, Medicaid, aid for the arts and public library systems -- all could be considered says Risser.  [Emphasis added.]

[I just talked with Terry Tuschen, a legislative aide to Sen Risser, and he confirmed that "public library systems" is actually a reference to maintenance of effort.]

"I don't think there's going to be an out-and-out repeal of everything [Walker] did, but what's going to happen is we're going to revisit the areas of his most egregious activities, and, I think, moderate to a degree," says Risser.

But if the Democrats don't win the Senate in August, Risser says, "I have to think the recall efforts on the governor are not viable."
Posted by Retiring Guy at 3:01 PM