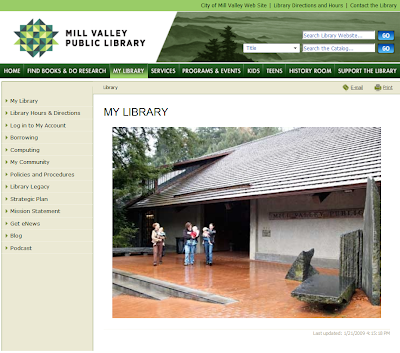 Excerpt:  It began with 750 books from the reading room of the Outdoor Art Club and it has grown into a center of cultural life in Mill Valley.

As the Mill Valley Public Library celebrates its 100th birthday, it remains one of the city's most beloved institutions, even as the role of printed books appears to be diminishing in a digital age.

"We are not just a place that stores media, but a place where people can come and think hard and be curious and have available to them material and programs and services that support that," said Anji Brenner, the library's director.

One of the county's oldest free public libraries, the Mill Valley library opened in 1911 with the help of $10,000 grant from the charitable foundation of industrialist Andrew Carnegie. The Carnegie libraries, which also San Rafael's and San Anselmo's, predate the county system that now runs the majority of Marin's libraries (The independent Belvedere-Tiburon Library claims roots in a collection hosted on a steamship as early as 1895).

The Mill Valley library was first built at 52 Lovell Ave. at the site of what is now a private home. By the 1920s the library's collection grew to thousands of volumes, and over the next several decades the library struggled to keep pace with the city's growing population.