Kim Simac Not Proud Her Book was Published in China 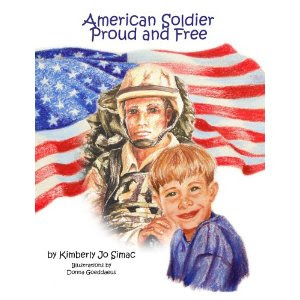 2 copies, none checked out, in LINKcat (South Central Library System)

Excerpt:    If you're going to write a ra-ra book about America and its soldiers, there's one thing you might want to make sure you do:

Kim Simac, a Republican running against Democratic Sen. Jim Holperin in a recall election, wrote a children's book called "American Soldier Proud and Free" in 2007. She refers to the 32-page book - in which a kid details his love of God and country in an extended poem - occasionally on the campaign trail.

"I want to be like my Grandpa and his buddies from the war . . . because I believe America is something worth fighting for," says the narrator in Simac's book. It is dedicated to "God my Father. Who has always been with me, giving me so many wonderful gifts. The greatest of all is being born an American."
Posted by Retiring Guy at 5:18 PM