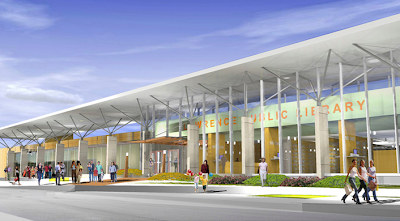 Excerpt:   Dozens of people turned out Sunday night for the Sneak Peek party at the Lawrence Public Library. The event was held to showcase the latest designs for the $19 million expansion and renovation project at the library. Residents were able to view approximately 10 different drawings of what the facility may look like.

Comment cards were made available to people so that they could first look at the designs and then offer their input on any changes they would like to see. Library Director Bruce Flanders says the design process is taking a little longer than expected. “We want to get it right,” he said. Library officials have offered multiple opportunities for the public to comment on the features they’re most interested in, such as additional parking or meeting space. Flanders says the designers have told him, despite the slight delay in finalizing the design, they will still be able to complete the project on time.

In November, Lawrence voters approved the project. The city committed $18 million dollars, with the library pledging to bring in $1 million. Flanders says the fundraising efforts have been a success with more than $500,000 already raised.
Posted by Retiring Guy at 7:41 PM