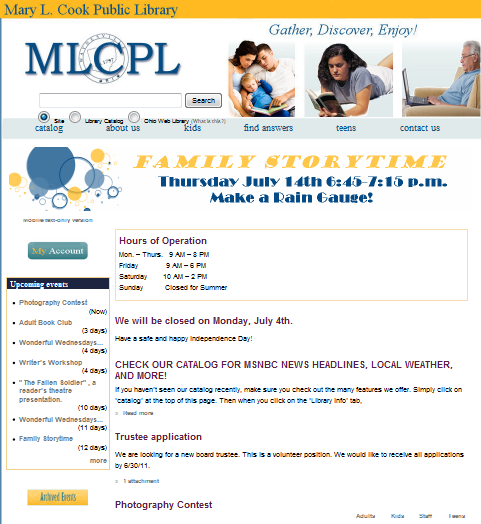 “To foster a love of reading, we want to have a positive experience for children when they read,” said Linda Swartzel, head librarian for the Mary L. Cook library.

The expansion, which is being designed by Anderson, Ind., based architecture firm, KRM Architecture, was first estimated to cost $1 million to complete, but Swartzel said the library can save $400,000 by using students at the Warren County Career Center for labor in building much of the expansion. Swartzel said the scenario was a “win-win” for both the library and students at WCCC because it gave the students in the school’s construction programs a field-based assignment to learn on.

The current Mary L. Cook library was built in 1987.

The building was expanded in 2004, but prohibitive costs at the time forced the library to curtail any plans to expand the children’s section.

“The children’s section was moved but they really didn’t gain any space,” Swartzel said.
Posted by Retiring Guy at 8:00 AM