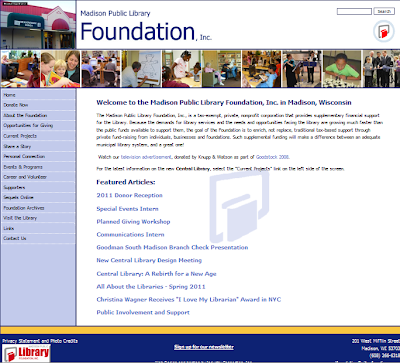 Excerpt: The late Helen Matheson Rupp has left a bequest of $3,472,000 to the Madison Public Library Foundation.

"The gift was a wonderful surprise," said Jenni Collins, Executive Director of the Madison Public Library Foundation. "It is the largest gift in the Foundation's fifteen-year history."

Helen Matheson Rupp, who died last year at age 88, was the first woman executive at the Wisconsin State Journal, where she worked from 1942 to her retirement in 1977. She first worked as a reporter and feature writer, later becoming Sunday editor in 1949 and assistant manager in 1957. Upon her retirement in 1977, she was awarded the YWCA-Madison's Women of Distinction Award for community service, professional achievement, integrity, leadership, and dedication to the lives of others.

After retirement, Matheson Rupp wrote on a freelance basis, traveled extensively and remained active in many professional and community organizations, many of them related to reading, history and civic engagement.

"I wish I would have had a chance to know Helen Rupp," commented Jenni Collins, "from talking to those who knew her she sounds like a dynamic, smart, and inspiring lady."

According to those close to Rupp, libraries were instrumental in her work and personal life. In making her decision to make this sizable bequest to Madison Public Library Foundation, she determined she wanted to leave a gift that had a lasting impact on the entire Madison Public Library system.
Posted by Retiring Guy at 10:22 PM