Hispanic Population in Wisconsin Grew by 74% since 2000 Census 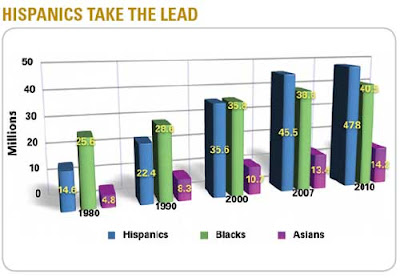 Excerpt:   Wisconsin's booming Hispanic population over the last decade might be the beginning of a trend, as growth continues to spill from Chicago into southeastern parts of the state.

Chicago by far has more Hispanics than any other city in the Great Lakes region, but the Census indicated many of those residents are moving away from the inner city. That could significantly increase growth in southeastern Wisconsin, where Bue said Hispanics are finding jobs in construction and factories.

"It's definitely (because of) the Chicago region," said Bue, who also is involved with the county's Latino Service Providers Coalition. "A lot of people are tending to move from larger (communities). They're kind of looking away from those major metropolitan cities, and we've definitely seen a lot of that."
Posted by Retiring Guy at 6:36 AM