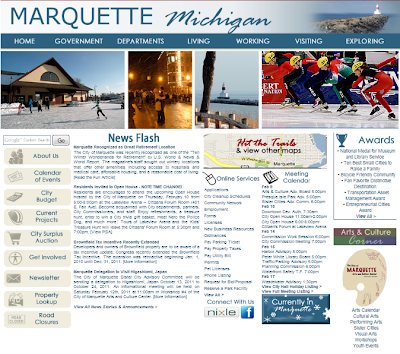 Excerpt: A century-old outdoor clothing store ships coats and woolen socks around the nation, while down the block one of the newer companies in town fields inquiries about its miniature video cameras that skiers, mountain bikers and even troops in Afghanistan attach to their helmets to record themselves in action.

They are among small businesses in Michigan's off-the-beaten-path Upper Peninsula that owe their success to high-speed Internet access, which President Barack Obama considers a potential economic savior for America's countryside and small towns. Obama will campaign for his coast-to-coast wireless initiative on Thursday during a visit to Marquette, a university and tourism city of 20,000 overlooking Lake Superior that cherishes both its geographical remoteness and technological savvy.

"The Internet is as important as oxygen up here," said David Ollila, a local entrepreneur who has founded seven companies, including the camera vendor, V.I.O.  His latest venture, Marquette Backcountry Ski, markets a snowshoe-ski hybrid that he invented and sells online from an office in his basement.

Like many in the Upper Peninsula, the 41-year-old Ollila is an outdoorsman who doesn't just survive the brutally cold and snowy winters; he thrives in them. Generations of self-proclaimed "Yoopers" made their living off the land -- as miners, loggers and farmers. Nowadays, those trades don't provide enough jobs to prevent a steady exodus of young people, and many of the U.P.'s villages are stagnant or in decline.

Marquette, where Northern Michigan University gives laptop computers to all 9,400 students and a regional hospital provides "telemedicine" services to distant clinics, is trying to develop a web-based economy that will serve as a model for other communities -- places where the small-town quality of life could be a powerful magnet if only more jobs were available.
Posted by Retiring Guy at 7:03 PM