Students' Textbook Preference: Continuing to Go Against the Digital Grain 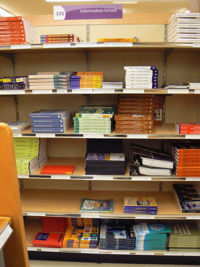 Excerpt:    Despite their fondness for social networking and cell phones, most college students say they prefer textbooks in printed rather than e-text form. Nearly 75% of students to recently respond to a major new research survey from the Book Industry Study Group (BISG) said they prefer printed texts, citing a fondness for print's look and feel, as well as its permanence and ability to be resold.