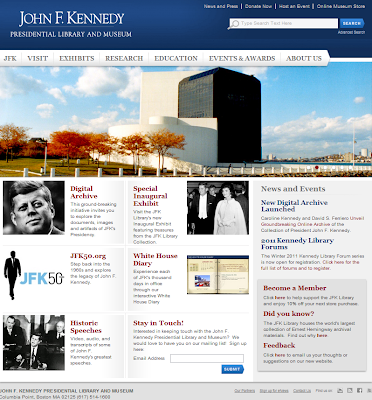 Excerpt: To help mark the 50th anniversary of the inauguration of President John F. Kennedy, David S. Ferriero, Archivist of the United States, and Caroline Kennedy, President of the John F. Kennedy Library Foundation, today unveiled the nation’s largest online digitized presidential archive, providing unprecedented global access to the most important papers, records, photographs and recordings of President John F. Kennedy’s thousand days in office. The announcement was made in the Archivist's Reception Room in the National Archives building in Washington, D.C.

Until now, the national treasure of historical material housed in the Kennedy Presidential Library’s collection has been available only by a physical visit to the library itself. With the launch of the new digital archive at www.jfklibrary.org, students, teachers, researchers and members of the public now just need an internet connection to search, browse and retrieve original documents from the Kennedy Library’s collection, gaining a first-hand look into the life of President Kennedy and the issues that defined his administration.
Posted by Retiring Guy at 7:26 AM