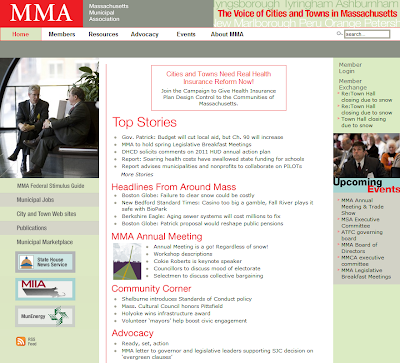 Excerpt: The governor’s proposed $65 million cut in local aid would mark the fourth consecutive year that the money — which helps pay for police officers, firefighters, senior centers, and other local services — has been reduced. Local aid has been cut by 32 percent, or $416 million, over the last three years, according to the Massachusetts Municipal Association.

Municipal officials, who were bracing for a local aid cut in the budget year that begins July 1, nevertheless expressed chagrin that the account would be slashed again. They said it would inevitably trigger further cuts in communities that have already laid off workers in schools and town halls, closed libraries and firehouses, and reduced other basic services.

Related articles:
Massachusetts municipalities adjust to the 'new normal'.  (11/8/2010)
Just what you'd expect: Cuts in state aids to localities result in layoffs and service cuts. (7/5/2010)
Massachusetts state budget includes cuts in aid to cities and towns. (6/24/2010)
Posted by Retiring Guy at 7:59 AM