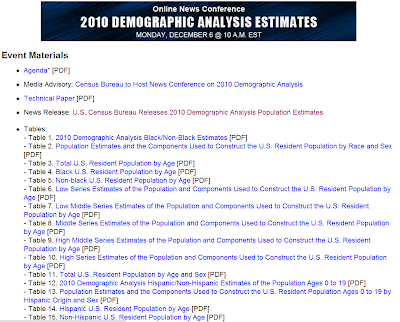 Excerpt: The Census Bureau today released five sets of population estimates for the nation as of April 1--but not from the soon-to-be-released 2010 Census count. The estimates are based on an alternative measurement technique, called demographic analysis, that agency officials say employs plausible assumptions about population change. The demographic analysis estimates range from a low of 305.7 million to a high of 312.7 million. The first numbers from the 2010 Census, which will include a national population total and state totals for reapportionment purposes, will be released later this month.

At a news conference today, Census Bureau Director Robert Groves said the five different estimates all make "plausible assumptions." The analysis will be among three major tools used by the bureau to evaluate the quality of the 2010 Census. The other two include quality measures such as mail return rates from the census itself, and a post-census quality-check survey for which results will be released in 2012.
Posted by Retiring Guy at 9:06 AM