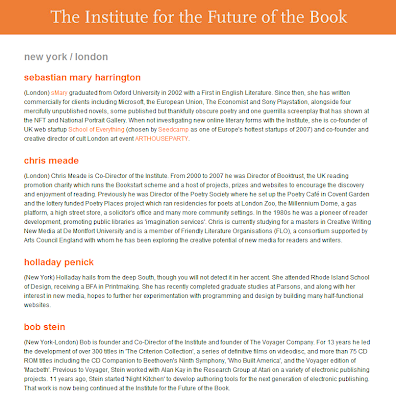 Excerpt: Now that the revolution is here, Stein says publishers should embrace what he sees as the inevitable result: the evolution of reading from a solitary pursuit into a communal, electronically networked activity — something he calls social reading and writing.

The advantages of digital technology "are so weighted toward collaboration that people will tear down the existing structures and build something new," Stein said while sitting among the jammed but now rarely touched bookshelves in his Brooklyn home.

Head of the ambitiously named Institute for the Future of the Book, Stein is one of a collection of programmers, philosophers and other deep thinkers who debate where things are heading in online venues such as a conference titled Books in Browsers and an online discussion group called Read 2.0.

"Bob's ambition is really to change how people think about the book," said Brian O'Leary, a founder of consulting firm Magellan Media.

In the world imagined by Stein, readers and authors will be in such constant communication that the line between them will begin to disappear.


At this point, I can only ask the question on the tip of every 3 year old's tongue:  "Why?"

In an atmosphere of "such constant communication", when would authors find the time to do any serious writing?  Seems as though Stein is asking us not only to rethink the book but entire process of writing. 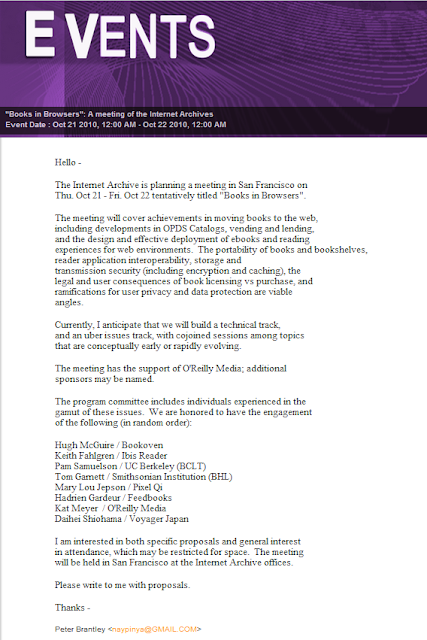 "The Teachings of Bob Stein".  From the Wired archives.
Posted by Retiring Guy at 7:22 AM