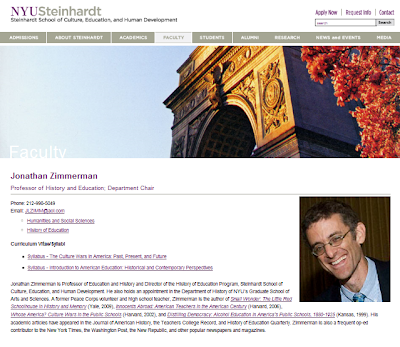 Excerpt: Now, if you're really clever, you'll hit me with some good old-fashioned American techno-futurism. "See, Professor Zimmerman, you're from that '1.0 World,' where people actually digested full articles and books, and wrote linear texts like your boring op-ed pieces. But we're entering a Brave New '2.0 World,' my friend." In the soon-to-be-eclipsed age of books, students had to passively absorb whatever the text said. But now they interact, inquire, collaborate, innovate.

Please. Every time a new technology develops, there's an American telling us it's going to transform education. In 1922, Thomas Edison predicted that the motion-picture technology he invented would "revolutionize our educational system." In the 1930s, similar claims were made of radio. Ditto for television in the '50s and '60s, and now computers.

But education hasn't changed. And it won't. I teach college students, and the things I ask them to do - analyze, synthesize, critique - are exactly what I learned at their age. And computers don't make it any easier. To the contrary, they get in the way.
Posted by Retiring Guy at 11:18 PM