PA Library for the Blind Study Hits a Philly Buzzsaw 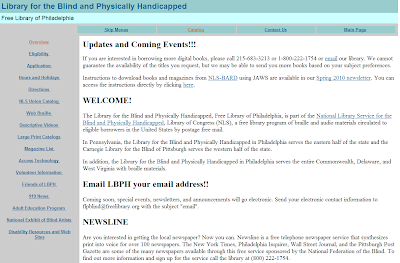 Excerpt: After more than a century in Philadelphia, the nation's oldest library for the blind is facing the potential loss of most of its materials and services to its Pittsburgh counterpart.

A state-commissioned study has recommended that the Philadelphia Library for the Blind and Physically Handicapped be significantly downsized - at a savings of about $600,000 a year for the Pennsylvania Department of Education, which funds it.

Although the principal heir would be the Carnegie Library for the Blind, the study also suggests moving Philadelphia's Braille collection - at 95,000 titles one of the country's largest - to Iowa.

The commonwealth's two libraries "are duplicating efforts, incurring unnecessary costs, and increasing the complexity" of usage for their patrons, the draft report said. It also described the library's four-story building at 919 Walnut St. as a "difficult environment in which to work" and warned of lease costs rising 7 percent annually in the next decade.

Predictably, with an estimated one-third of the state's 393,000 visually impaired residents living in the five Southeastern Pennsylvania counties, the study has run into a wall of outrage.
Posted by Retiring Guy at 8:35 AM