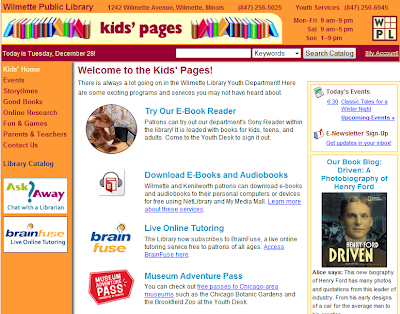 Excerpt:   Kids at the Wilmette Public Library also have the opportunity to create computer games. In fact, over the past several years, dozens of local kids have learned Scratch, a digital media design program, at the library. We can't promise they'll become Internet moguls, but we can help them begin to develop the creative mindset that Zuckerberg and other successful innovators possess. Making games and other projects with Scratch can help build the 21st century learning skills that are key to future achievement.

At the Wilmette Public Library, librarians, with the help of teen and tween volunteers, teach Scratch to youth between the ages of 10 and 14. At workshops, new users learn Scratch as a group, while experienced Scratchers often work on independent projects. Projects have included a digital Magic 8 Ball, a Space Shooter game and a Turkey Hunt game.
Posted by Retiring Guy at 5:56 PM