The Library Traveler: The Malatestiana Library in Italy 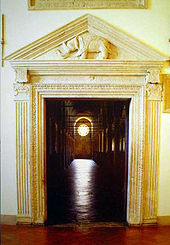 Excerpt: If you’re a lover of books and libraries like I am, you’ll get a rush stepping inside what is said to be the first public and monastic library in Europe, the Malatestiana Library. The experience is made even more remarkable when you learn that despite wars and natural disasters, the building, its furnishings, and manuscripts have all remained virtually untouched since the structure was built in the middle of the 15th century.

The idea for the humanist library, which was built between 1447 and 1452, is attributed to the Friars of St. Francis, who wanted a study area annexed to their monastery. In what has been called the golden age of this city, Malatesta Novello agreed to finance the project. This entailed both building the structure and acquiring and commissioning the books. His team of “librarians’’ organized a two-decade-long effort to transcribe books they found elsewhere in Europe and return to Cesena with their contents. Six or seven Nordic writers were charged with copying the books into gothic or semi-gothic script; others were tasked to illustrate and bind them.

The library holdings, totaling 343 manuscripts, include legal, medical, scientific, literary, theological, and philosophical works as well as 14 Greek codices and seven Hebrew ones. While it was open to the public, it was not a lending library. The books remain attached to the wooden desks by heavy wrought iron chains as they were then, subdivided by subject and kept in precise order.
Posted by Retiring Guy at 8:39 AM