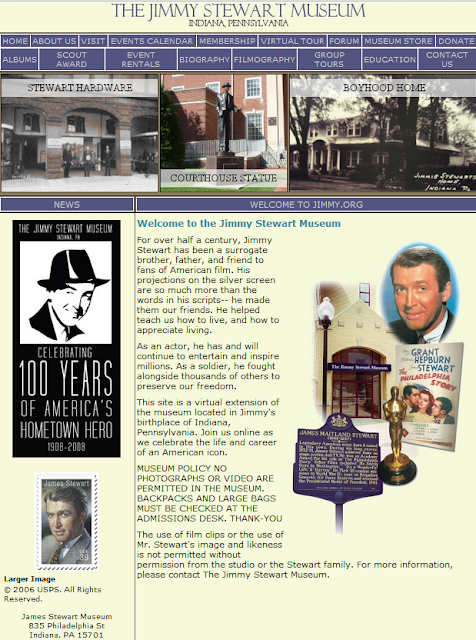 Excerpt: After seeing the Jimmy Stewart statue, the solid-oak front door that once graced the actor's home, his military memorabilia, priceless film posters and costumes, and even a red leather booth from a favorite Beverly Hills haunt, the Wisconsin couple signed the gues
t book at the Indiana, Pa., museum.

"This fulfills a bucket list dream . . . Thank you so much!"

The Jimmy Stewart Museum, a modest but meaningful salute to a wonderful life that started nearby, could use more patrons with bucket lists or soft spots for Shenandoah or Vertigo or The Philadelphia Story.

No one's murmuring prayers, as in the opening of Stewart's holiday classic, but the museum is in need of a few angels with open or deep pockets.

A boost in attendance and publicity related to a recent appearance by Patrick Wayne, who accepted the museum's Harvey Award on his behalf and that of his late father, John Wayne, obviously won't last.

"Until we have an endowment, it's touch and go," says Timothy Harley, executive director of the museum.

The Liberace Museum, dedicated to the flamboyant entertainer, closed in October in Las Vegas after 31 years. A museum celebrating Roy Rogers and Dale Evans, last located in Branson, Mo., shut its doors in December.

The Jimmy Stewart Museum's problems include a drop in attendance from 6,500 in 2009 to nearly 5,000 this year through mid-November; a cut from $5,500 to $1,400 (and soon, nothing) from the Pennsylvania Historical and Museum Commission; an inability to squeeze into increasingly narrow foundation guidelines; and the sad reality that some fans are aging out of bus tours that keep museums humming.

The opening credits of my favorite Jimmy Stewart film.

With the best soundtrack ever.
Posted by Retiring Guy at 8:48 AM