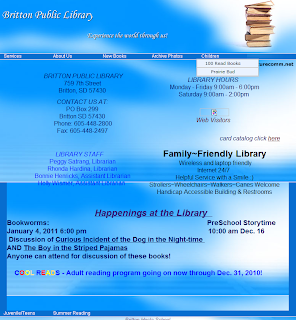 Excerpt: The former director of the Britton Public Library was sentenced Thursday to 30 days in county jail for embezzling from the city.

Pamela "Sue" Bull, of Lake City, must also pay $4,500 in restitution and spend two years on probation. She was granted a suspended imposition of sentence. That means the incident won't go on her record if she adheres to the terms of her probation.

Timothy Purintun, Marshall County state's attorney, said that Bull used a city credit card to pay personal bills. Purintun said Bull charged $21,386 in personal expenses, but had been paying off some of the bills as time passed.
Posted by Retiring Guy at 8:38 AM