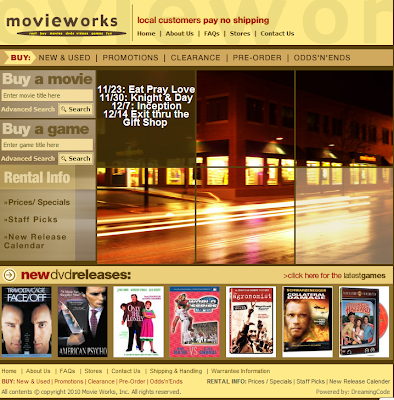 
Excerpt:      In business since 1996, the store did its last rental transactions on Sept. 27, and has been in liquidation mode since; owner Greg Revill expects to close for good by the end of this week.

“I kept it going as long as I could,’’ he said. “Business has been in decline for years.’’

This year was particularly bad for the brick-and-mortars, especially the industry’s two largest chains: Movie Gallery went out of business this spring, and Blockbuster recently filed for bankruptcy protection.

“Over the past several years, the video store universe has been paring down significantly,’’ said Michael Arrington, an analyst with the market research company IHS Screen Digest. 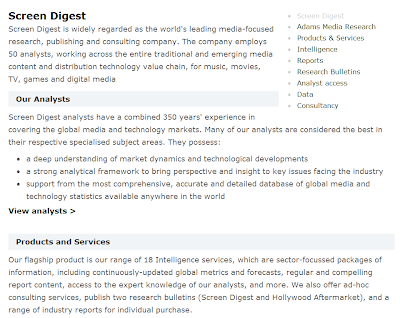 ﻿
A history lesson provided by the Greensboro News-Record (4/2/2010), "Independent video stores may be dying breed".

Excerpt:  The first video rental store opened in Los Angeles in 1977. The place, called Video Station, boasted 50 titles on VHS and Betamax, and charged $10 per night to rent a movie.

The industry expanded rapidly in the 1980s with video rentals cropping up not just in standalone locations, but also in places such as gas stations, grocery stores and tanning salons.

"It was an ideal thing for a mom and pop," said Don Mazzella , who helped produce several conventions for video dealers in Las Vegas in the 1990s, and now works as COO of management and marketing firm Information Strategies. "A lot of people made money. What did it take? It took shelving. The studios provided all your decorations, like the big posters. You could start with $6,000 to $3,000 deposit for the rent, and $3,000 for the inventory. You could coin money hand-over-fist."

By the mid-1990s, however, mom-and-pops began facing intense competition from chains suchh as Blockbuster. Though the chains often charged higher prices, they also let customers keep the movies for a longer period and had a wider selection.

The industry was also undergoing a big change in its distribution system.

Up until the late 1990s, new release tapes could run upwards of $100, and were generally not made available for purchase by the general public. A few exception were children's films and the occasional box office hit such as "Jurassic Park" or "Batman," which retailed for about $24.95. Many a renter, veteran video clerks say, were stunned at the charges they were hit with when they reported a new release as lost.

"It used to be the public had to wait six months before they could buy a new release," Hamilton said. "If you came in at 2 or 3 in the afternoon the day a movie was released, you were too late. They were all gone, all rented. But, now you can go to Walmart and buy a DVD for $14 on the day it comes out. That took a lot of business away."

Netflix was introduced in 1997. For a monthly fee, subscribers could receive anywhere from one to eight movies at a time by mail. It now also offers Internet streaming (at no additional charge to its subscribers) on a number of titles.

Redbox was started in 2003 by a subsidiary of McDonald's and allows users to rent movies from vending machines for $1 per night. It has spawned a number of similar services, including a vending machine effort by Blockbuster.

According to the Entertainment Merchants Association, the number of rental stores in the United States declined from about 21,000 in 2006 to just more than 14,000 in 2008. In 2004, traditional rental outlets accounted for 92 percent of consumer rental spending. By 2009, that figure fell to 60 percent with subscription services accounting for 30 percent and kiosk rentals 10 percent. By 2012, the traditional outlets' market share is expected to fall to less than half, according to the EMA.
Posted by Retiring Guy at 9:43 AM