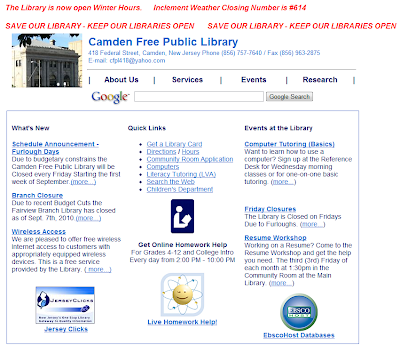 LINK
Link to December 30 Philadelphia Inquirer article, "Camden library staff to be laid off; county to take over".

Excerpt: All 20 staffers at Camden's two remaining public libraries will be laid off effective Feb. 11, officials said Wednesday, although the county plans to take over one of the branches and allow employees to reapply for their jobs.

The layoffs, prompted by budget cuts, mean that the main branch on Federal Street in downtown Camden will close and that the city will cease providing library services for the first time in 105 years.

The Ferry Avenue branch, which Camden County built for the city five years ago, will be taken over by the Camden County Library System, according to a statement from the county.

To replace the main branch downtown, the county is in talks with Rutgers University-Camden about carving out a space in the university's nearby Robeson Library, a school spokesman said. The county library system would staff that facility.

The county plans to fund its operations in the city with a dedicated tax assessed to city property owners.

A third library in South Camden was closed earlier this year because of budget cuts.

Mayor Dana L. Redd, facing a fiscal crisis that also means deep layoffs for the Fire and Police Departments, cut city funding to the libraries this fiscal year from $923,000 to $390,000.