Audrey Ashworth: "She made the library the hub of middle school life". 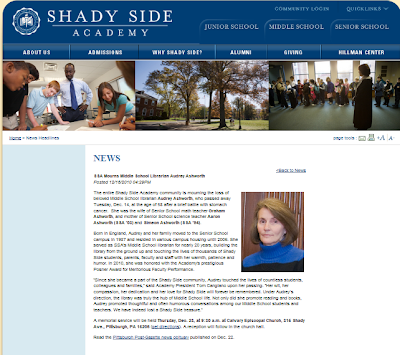 Excerpt: If a student came into the Shady Side Academy Middle School library, plopped down on a big floor cushion and declared, "I hate to read," librarian Audrey Ashworth took that as a challenge.

"She really helped to make sure this was a community of readers," said her colleague, Martha Banwell, an English teacher. "It didn't matter whether the kids came in as readers or not."

Her magic in getting students to read was getting to know the students. By knowing their own interests, she was able to recommend books that appealed to them.

"She knew every kid. She knew every faculty member," said Ms. Banwell. "She worked hard to stay up-to-date with what was happening in young adult literature and had an extensive grounding in the classics."

Shady Side Academy president Thomas Cangiano said, "She made the library the hub of middle school life."

Her ties to the students were so strong that even after she learned she had the cancer that resulted in her death 19 days after diagnosis, she returned to the school to meet with her sixth-grade advisees.