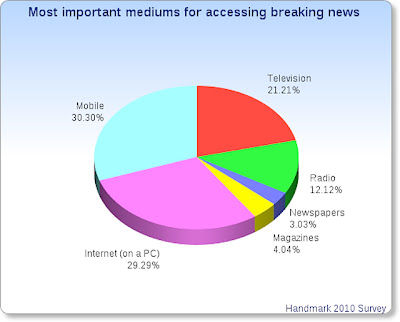 Excerpt: U.S. smartphone owners are increasingly turning to mobile to access breaking news over other media, including newspapers, TV and desktop web browsers, according to a recent study from mobile app developer Handmark.

In a survey of 300,000 mobile consumers, 88% of whom owned a device running one the five most popular smartphone operating systems, more than 30% said that mobile is the “most important medium” to access breaking news, narrowly followed by desktop web browsers (29%), television (21%) and newspapers (3%).
Posted by Retiring Guy at 8:49 AM