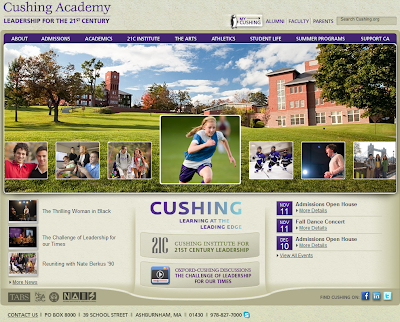 Excerpt: As prophets go, Tracy is alone in the wilderness closer to home. While other institutions have expressed interest in what Cushing has done, he’s unaware of other schools following his lead, and larger prep schools such as Phillips Academy in Andover and its sister school, Phillips Exeter Academy, have no intention of getting rid of their books. Exeter has 176,000, Andover more than 150,000. (“In general, I believe that the book in its traditional form is beyond wonderful and is not going to become obsolete,’’ says John Rogers, Andover’s dean of studies.)

Meanwhile, Cushing’s library has been transformed into a wide open space (though there are a couple of stacks left). Circles of comfortable chairs are located at each end of the room, where some classes are held, and students study together or, just as often, chat at tables in the middle. There’s a coffee shop, too. The new iteration, in Cushing parlance, is “a creative commons.’’ The sepulchral silence of a traditional library is gone. (A small Silent Room remains for those who need quiet to study.)

Recommended reading for James "I-can't-believe-McGovern-lost-everyone-I-know-voted-for-him" Tracy:  "What do teenagers think about ebooks?  Not much."
Posted by Retiring Guy at 9:05 AM