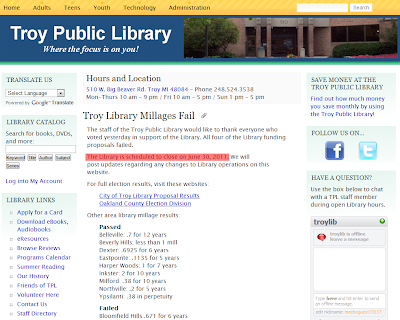 Excerpt: Voters in Troy on Tuesday rejected four separate millage proposals that would have saved the city's library, which is scheduled to close July 1, 2011.

The first proposal -- a 10-year, .9885-mill increase -- was rejected by fewer than 600 votes, with 51.13 percent of voters notching a "no," according to unofficial results from all 31 precincts provided by the Oakland County Clerk's Office.

Voters rejected the other three proposals by significant margins.