Libraries Not the 'Silent, Somber' Places They Used to Be 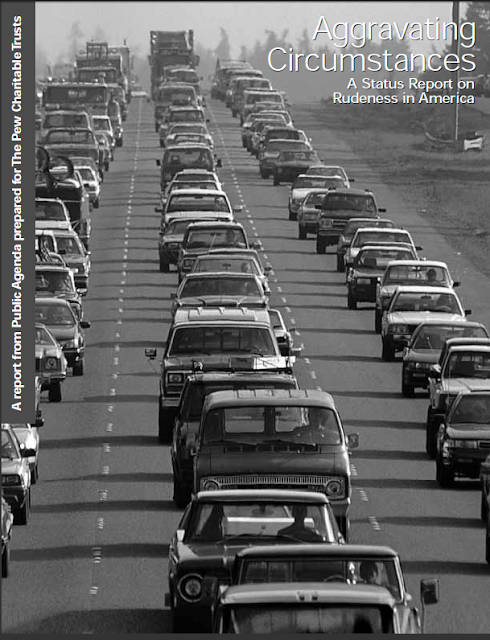 Published in 2002
but still frequently referenced

And in related news.....
(No tax for tracks?   What suburban dream?)
Link to Maureen Downey's October 20 'Get Schooled' column in the Atlanta Journal-Constitution, "Turning up the volume in our lives. Everyone seems to be talking now, in the library, in class. Is quiet old school?"

Excerpt: The WSB-TV story about the mother being arrested in the Decatur library allegedly because she wouldn’t quiet her noisy toddler made me think about noise in schools and libraries. (BTW, having used that library many times and seen the tolerance toward boisterous children, I have to believe the library’s account that the police were called because of the woman’s loudness rather than the child’s.)

First off, libraries in general are louder than they used to be. As a young child, I was a regular at the library near my house and it was a silent, somber place where I checked out my “Harriet the Spy” books and fled home to read them.

Today, libraries are filled with parents and toddlers and there are bean bag chairs and little tables that invite kids to get comfy. The child-friendly nooks and crannies also invite noise because where they are children, there is noise.

In fact, I also see many more adults who talk in normal tones rather than the whispers in libraries. I am always shushing my own kids in the library while everyone else is talking as if they were in the food court of the mall.

It's not just libraries and schools.

Years ago, when people entered a church, they remained quiet until the start of the service.  They didn't open their mouths until the singing of the opening hymn.  Not to mention the fact that everyone dressed up.  Men and boys wore suits or sports jackets, with a tie (I was still in my clip-on phase back then), and women and girls would never be seen wearing slacks.  Most of the adults wore hats, although the men took their off upon entering the church.  (OK, I admit it; I'm seriously dating myself here.)

Nowadays there are generally pockets of conversation going on even through the organ prelude.  And the attire is decidedly casual, as if congregants were "in the food court of the mall".

Based on a 2002 report, Aggravating Circumstances: A Status Report on Rudeness in America, we don't seem to be inclined to change our ways.

Excerpt:  Lack of manners for Americans is not whether you confuse the salad fork for the dinner fork, said Deborah Wadsworth, Public Agenda president. It's about the daily assault of selfish, inconsiderate behavior that gets under their skin on the highways, in the office, on TV, in stores and the myriad other settings where they encounter fellow Americans.

Among the report's key findings were that:

I have taught in a middle school for the past 13 years and I am now 62. We have been told that "students aren't the same as they used to be," and "need" the stimulation of being able to work in pairs or groups very often. "They learn from each other" better than from a book, taking notes, listening to a short video or the teacher, etc., etc., etc.

On the other hand, I have a student who gets headaches from the loudness of his particular class and I am getting negative parent feedback. He is an introvert and 75 percent of his class, as well as the rest of my classes, fall squarely on the extrovert scale. Unfortunately, they don't have the desire to respect anyone else, since all they pay attention to are the others who are also constantly talking and don't care who else is constantly talking. They manage to stop talking while I say a sentence or two. That is the best they can muster, and there is nothing I can do other than arrange the lesson around the "needs" of the extroverts if I expect a decent evaluation. And yet, after I give the barest of introductions and directions and let them get to work, many say, "I don't get it," since they don't want to read any part of the assignment, etc. What they want is their own teacher at their individual beck and call.

Needless to say, this is my last year. And, need I say, I am an introvert. I would highly recommend that if you are an introvert, DO NOT TEACH 1st THRU 8th GRADE unless your school is willing to enforce students actuallly closing their mouths and showing respect to others. My school gets the transfers of those who couldn't hack it at one of those schools. The admin is happy because now we have a higher student count and therefore get more money.