LIS 712 students. Guess what we're going to discuss next Wednesday? 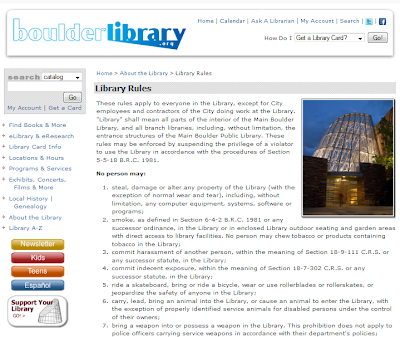 Manuel Rodriguez-Calanche is accused of yelling racial slurs and making threatening comments to a library employee who told him it was closing time and he needed to leave, police said. The employee is originally from Africa.

The incident occurred just before 6 p.m. Sunday at the main branch of the library, 1001 Arapahoe Ave. The victim reported the confrontation the next morning when he returned to work and saw the suspect outside the library, police said.
Posted by Retiring Guy at 2:21 PM