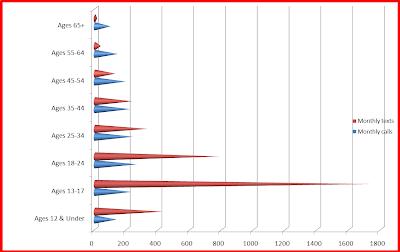 Excerpt: In a brief report released today, Nielsen, famous for its TV ratings, said American teens are communicating with their mobile pho-- um, mobile devices more often via texting, at the expense of voice calls.

During the second quarter, device users in the 13- to 17-year-old bracket sent or received more than six text messages every hour that they were awake, Nielsen said. That's an average of 3,339 texts a month, an 8 percent increase from last year. At the same time, voice activity decreased 14 percent--to 646 minutes, nearly 11 hours, of chatter per month--with many teens citing the ease and speed of texting over voice calls.

At the time this song was popular -- the fall of 1962 -- the Nelson household (Dad, Mom, 4 kids) contained just one phone. In the living room.