Renovating a 1975 Library Facility to Reflect Its Current Service Program 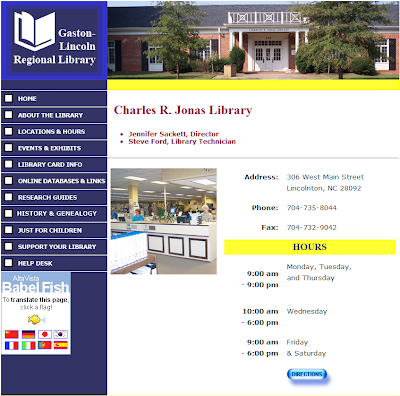 Excerpt: When Lincolnton's current library building was built in 1975, the Internet was mostly science fiction.

Readers still focused on traditional books and magazines, and around the quiet sanctuary, things flowed at a leisurely pace.

Today, when doors open at the Charles R. Jonas Library, there's a rush to the computers and Internet access. Books and magazines remain at the heart of the mission, but new technology has greatly expanded its scope.

While library usage has steadily increased, few updates have been made to the building over the years.

But plans for a major interior renovation are in the works. And a recent $75,000 grant from the Timken Foundation of Canton, Ohio, will help get the project started by spring, according to library officials.

"The goal is to create a library environment that's more functional, inviting and comfortable for both children and adults," said Jennifer Sackett, director of the Lincoln County Public Library. "These are much needed improvements."
Posted by Retiring Guy at 6:00 PM