Letter Writer Has Ax to Grind with American Library Association 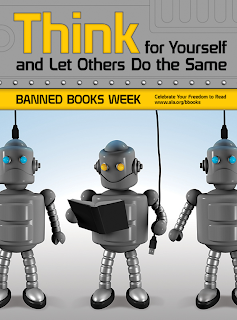 Arlene is having none of it.
Link to October 5 letter to the Daily Herald, "Library association has too much power".

The annual Banned Book Week, which ended Saturday, is an outright farce and an insult to the taxpaying public. The American Library Association uses this deceptive and disgraceful propaganda to set up parents for ridicule, knowing full well what the Supreme Court has ruled about legally keeping inappropriate material from children.

The last book "banned" in the U.S. was "Fanny Hill" in 1963. Since then, the ALA-inspired mechanism, "Materials Reconsideration Policies," directs libraries to utilize their own book challenge format, then turns around to ridicule anyone who avails himself of such policies, labeling them "censors," "threats to free speech" or "people who feel they can decide for others what they can read." But, the reality is that the ALA is the one who does the "censoring" through it's own materials selection policy guidelines.

The ALA is not a governmental agency but a private association of professional librarians who have incrementally usurped the ownership and power over our taxpayer-funded libraries. They have radically fought any attempt to legally challenge books for legitimate reasons, even against U.S. Supreme Court rulings. An example: United States v. American Library Association. "The interest in protecting young library users from material inappropriate for minors is legitimate and even compelling, as all Members of the Court appear to agree."  (A case that dealt with the Children's Internet Protection Act, not collection development.)

The ALA cannot be trusted. Its propagandistic efforts are designed to fool local communities and media into leaving children exposed to inappropriate material it would be constitutionally legal to prevent. Are you comfortable with allowing the ALA alone to decide what others especially young children could read?


All of a sudden, "Think for yourself and let others do the same" has a ring of irony to it.

SafeLibraries.org -Are Children Safe in Public Libraries?
Posted by Retiring Guy at 6:59 AM