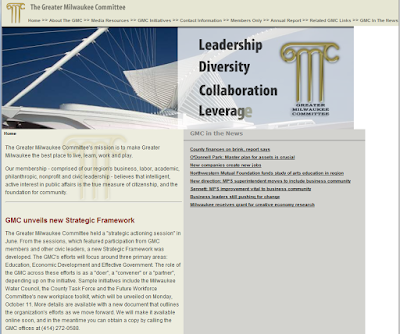 LINK
Link to Daniel Bice's October 9 'No Quarter' column in the Milwaukee Journal-Sentinel.

Excerpt: Milwaukee County government is in such dire financial shape that state lawmakers should push through legislation that would allow it and other local governments to file for bankruptcy.

That's one of several recommendations included in a super-secret report drafted by the Greater Milwaukee Committee last month. This group of movers and shakers has decided to hold off releasing the details until after next month's election.

But a copy of the report's draft executive summary obtained by No Quarter shows the powerful committee is looking to recommend doing away with the elected county executive's post, slicing county worker benefits and spinning off the zoo, the bus system, the parks and much else under separate commissions.

If these dramatic steps - or something like them - aren't taken county government will collapse, the draft report suggests. In fact, in just six years, the report estimates, the county's pension and health care obligations will eat up every dollar raised through the county tax levy.

At this point, the full report will not be released until after the election.
Posted by Retiring Guy at 10:08 AM