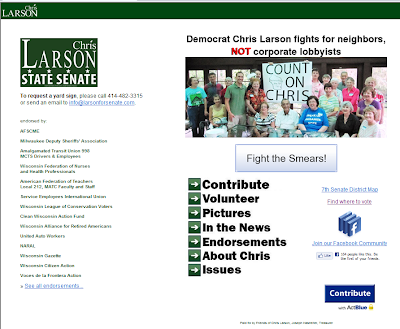 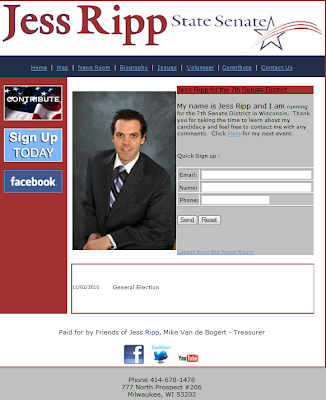 Excerpt: A crossover of Democrats voting in the GOP primary for governor helped set state Sen. Jeff Plale up for a devastating 61% to 39% primary loss to Milwaukee County Supervisor Chris Larson, both candidates agree.

Tuesday's victory in the 7th Senate District Democratic primary means that in January Larson, 29, or his even more youthful general election opponent, Republican Jess Ripp, 27, will become the youngest member of the state Senate.

"There was definitely a palpable excitement of people hungry for new leadership and hungry for changes in Madison, and our message hit home," Larson said.

In a year of voters tilting to the right, Larson ran to the left of Plale, a pro-business Democrat from South Milwaukee who saw his support evaporate as more conservative Democrats and Republicans voted in the GOP gubernatorial primary between Milwaukee County Executive Scott Walker and former U.S. Rep. Mark Neumann.
Posted by Retiring Guy at 8:18 AM