Uncollected/Uncollectible Fines Total Millions of Dollars for Some Counties 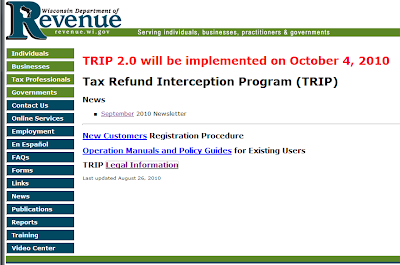 On one side, the court system operates under the thought that those responsible for the costs of the system should pay for it. "It's a reasonable requirement," he said.

On the other side of the equation is that those responsible for the costs often aren't in a position to pay.

For those who owe large sums, no amount of patience will make those court-ordered payments simply disappear, clerks say.

Court officials have undertaken a number of methods to bring those dollars flowing into the county.

"Some people are on payment plans," said Winnebago County Clerk of Courts Diane Fremgen. "That's something we work aggressively on. We'd rather get something than nothing."

Both counties use collection agencies to recoup from those who don't pay.

Both also work with the state Department of Revenue to intercept tax refunds to offset fines in cases where refund money is available.
Posted by Retiring Guy at 8:01 AM