But regular readers of this blog already know that. 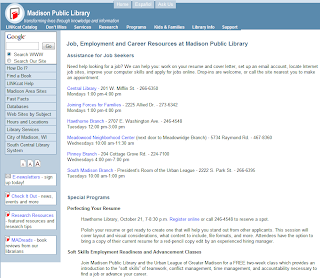 Excerpt: Internet use at the nine public libraries in Madison increased 23 percent from 2008 to 2009 and is projected to go up 27 percent this year over last based on numbers through August.

The steep recent jumps owe to the swollen unemployment ranks due to the economic recession and an increase in people who, like Johnson, need a job but also need training in the basic computer skills now all but essential in finding work, said Lisa Mettauer, outreach librarian at the central branch.

To deal with the boost in demand, the library started offering one-on-one tutoring to job seekers in April 2009, using federal stimulus funds. A federal Americorps VISTA volunteer, Jim Handorf, started the program and oversaw it.

The program has since expanded to six locations throughout the city. The most recent startup began Monday in the Allied Drive neighborhood, with the library partnering with the county's Joining Forces for Families program.
Posted by Retiring Guy at 7:14 AM