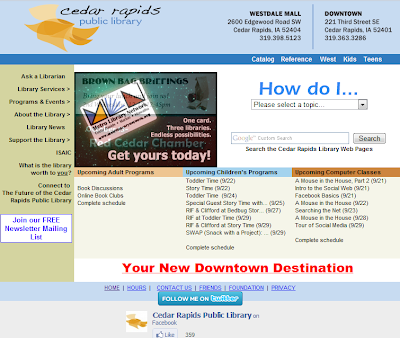 Excerpt: Officials from the Federal Emergency Management Agency’s regional office in Kansas City, Mo., will be in Cedar Rapids on Wednesday to talk about federal support for the city’s plans to replace its flood-ruined library with a new one at a new downtown site, Mayor Ron Corbett said Monday.

Corbett said he asked to meet a top FEMA regional official after FEMA’s Iowa representatives caught City Hall off guard last week when they said they could not support the city’s decision to build its new library across from Greene Square Park on a site now occupied by TrueNorth Companies.

The mayor and Greg Eyerly, the city’s flood-recovery director, said last week that the city had followed the direction of FEMA’s Iowa officials in making plans for the library site. The city had figured that FEMA would pay for the least-costly of three options, and the city would find other funds to make up the difference between the least-costly site and the TrueNorth one. FEMA, though, said the least-costly plan actually was a fourth one — tearing down the existing library and building a new one there on higher ground, an option the city believed FEMA many, many months ago had excluded from consideration.