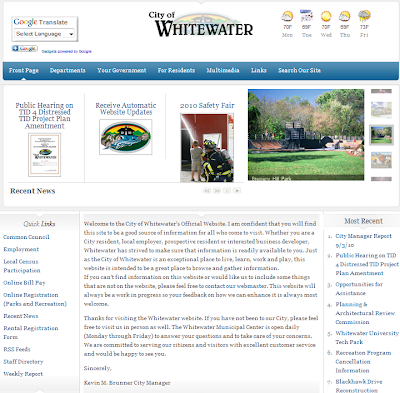 Excerpt: Regarding that last point, the city's four unions are in the middle of a three-year contract and they are set to get a 2.5 percent increase in wages and benefits in 2011; non-representative employees did not have any wage increases this past year, but are scheduled for a 2.5-percent increase at the end of this year. According to City Manager Kevin Brunner, the city is looking at an approximately $206,000 budget shortfall for 2011. The levy limit is 3 percent or the rate of new construction, whichever is higher; the city saw about a 1.85-percent hike in new construction over the last year. Last year, the council went with a zero-percent increase in the tax levy. It indicated that ideally, it would like to keep the tax levy at current levels, but that could alter the deficit the city is facing.

Brunner specifically asked the council members which services they would like to have cut, or at least reduced greatly.

Councilperson Marilyn Kienbaum suggested reductions in parks and recreation because they "are not a necessity."

Councilperson Javonni Butler suggested a hard look at the police budget, as well as the public works budget.

Ultimately, the council instructed city staff to pursue a zero-percent increase, although it was not adverse to an increase to match the city's growth in new construction, or about 2 percent.
Posted by Retiring Guy at 9:05 AM