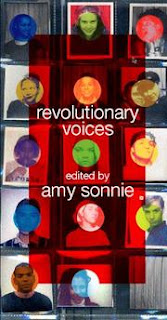 Excerpt: The book's removal on grounds it may be vulgar - again, according to whom? - raises questions about what other books could end up on a conservative hit list or any list of books some interest group might deem offensive.

Consider the list of books that have been targeted in the past: "The Adventures of Huckleberry Finn" by Mark Twain; "Catcher in the Rye" by J.D. Salinger; "To Kill a Mockingbird" by Harper Lee; "Slaughterhouse Five" by Kurt Vonnegut. Authors as varied as Anne Rice, Judy Blume, John Steinbeck, William Faulkner and Ray Bradbury have been on the wrong end of the censor's pen.

Each of these books raised significant and often difficult questions about the larger culture - about race relations, gender roles, sexuality, war, etc. - questions that demanded answers, but that too many at the time were unwilling to consider. Instead, fear ruled, and the books were banned.

That's what has happened with "Revolutionary Voices." The impulse to remove books we do not understand from the shelves of school and public libraries - or to keep them from being published in the first place - is an affront to our freedoms and incompatible with our democratic values.
Posted by Retiring Guy at 1:12 PM