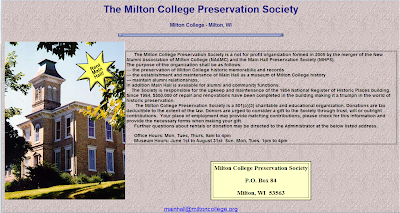 A bored student carving his initials on a desktop.

Coeds in pajamas, playing leapfrog outside of Old Main.

These are not outtakes from the FOX teen TV series “Glee.”

They’re snippets from silent films shot at the former Milton College in the 1930s and 1950s, pulled together into a digitally remastered DVD that took five years of film repair, reproduction and research.

The Milton College Preservation Society recently released the DVD, titled “Vintage Silent Films of Milton College: 1930s and 1950s.” The society, which operates out of Main Hall at Milton College, is hosting a free public screening of the film Saturday, Sept. 18, at the college’s annual homecoming.
Posted by Retiring Guy at 7:13 AM