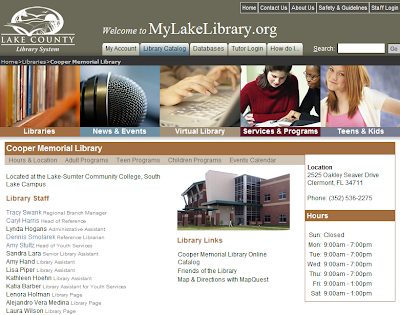 Excerpt: The new $12.7 million, 50,000-square-foot library at 2525 Oakley Seaver Drive on the Lake-Sumter Community College's Clermont campus was a joint venture between Lake County, LSCC and the University of Central Florida. It replaced both the college library and a temporary library facility previously in downtown Clermont.

Inside, a 7,000-square-foot children's section is as big as the entire downtown library was, with a separate story-time room (the circular section noticeable on the outside architecture), a puppet theater, computers, a garden and plenty of kid-sized tables and chairs.
Posted by Retiring Guy at 8:54 PM