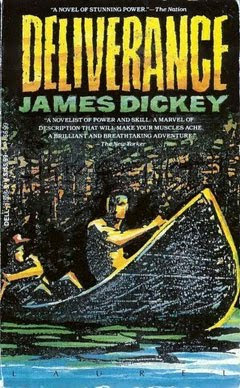 Excerpt: On the page and off, James Dickey (1923-1997) was a maximalist. His roomy, loquacious poems spill down the page in a waterfall style and in a voice he called “country surrealism.” It makes sense that he called some of these poems “walls of words,” similar to the record producer Phil Spector’s echoing “wall of sound.” Dickey’s music, rougher and weirder than Mr. Spector’s, was similarly packed with reverb.

It’s odd, then, that Dickey is probably best remembered for a spare novel, one from which he stripped most of the poetry, pulling out the finer phrasings like weeds. That novel was his first, “Deliverance” (1970), a book that turns a youthful 40 this year. It’s a novel that I was happy to discover upon rereading it by a deep lake this summer — Dickey’s stuff is always best read beside a vaguely sinister body of water — has lost little of its sleekness or power. The book’s anniversary shouldn’t slip by unnoticed.

“Deliverance” is the kind of novel few serious writers attempt any longer, a book about wilderness and survival whose DNA contains shards of both “Heart of Darkness” and “Huckleberry Finn.” It tells the story of four mild, middle-class men from suburban Atlanta who embark on a canoe trip, snaking down a remote Georgia river that will soon disappear beneath a dam. In the woods they find boiling rapids and two sinister mountain men. Before the novel is over, the carnage is nearly complete: three men have been crudely buried, one has been raped, and the survivors have had the bark peeled from their modern sensibilities.

Like Retiring Guy, most folks are probably more familiar with the movie than the book.