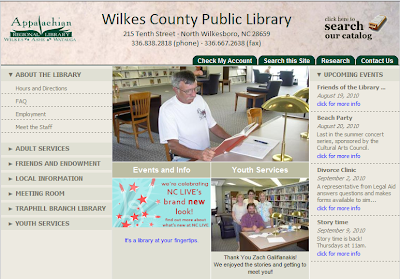 Galifianakis, a comedian and one of the stars of the movie The Hangover, is a native of Wilkes County. Yesterday, he was at the Wilkes County Public Library for a children's reading that drew hundreds of people. He stayed afterward for nearly two hours, posing for photos and signing hats, shirts, posters, money, DVDs, scraps of paper, old Wilkes Central High School yearbooks, and a GQ magazine with his face on the cover.

"It was very cool," said Dalton Combs, 12, who sported a Galifianakis T-shirt -- signed -- matching that of his friend Austin. "It was really, really awesome."

The reading was intended for young children, many of whom were familiar with Galifianakis from G-Force, a film in which he champions a team of guinea pigs out to save the world from an evil billionaire.

But word quickly spread in the days leading up to the reading, and the crowd included a lot of people with driver's licenses, jobs and mortgages.

About 508 people came into the library while Galifianakis was there. A majority of them found their way to the upstairs level, where he read three children's books aloud.
Posted by Retiring Guy at 7:15 AM